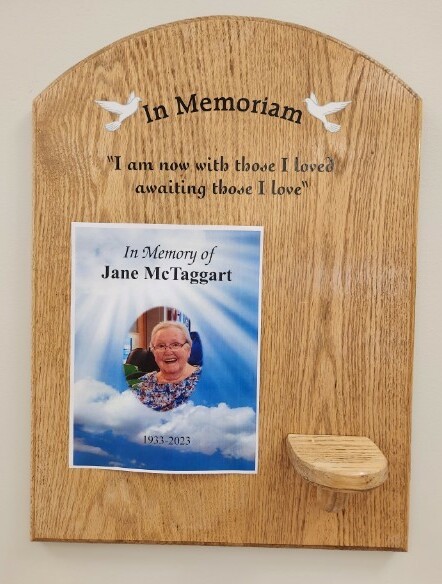 As a girl, Jane grew up on Cross Point farm, the youngest of Thomas and Lydia Cross a pioneer family of Shirley BC.  She met and married the love of her life Les McTaggart and were married December 13, 1950. They first lived on the homestead at Sheringham Point and later at what was known as Otter Point District outside of Sooke B.C. where their girls grew up.

Jane and Les moved with their son to Quesnel BC in 1977 to 169 acres on Ten Mile Lake.  Jane & Les became an emergency shelter for many foster children over the years as well as farming. Milk cows, pigs, horses & many chickens kept them very busy.  Jane & Les could be seen every weekend at the Farmers Market selling eggs and Les’s wood creations.

Jane’s husband Les passed away in 2005 so Jane sold the farm and moved into North Quesnel where you could see her walking to the grocery store or library using her walker to carry her purchases. Jane enjoyed charity work and could often be found at GR Baker Hospital as a volunteer for the Ladies Auxiliary.

In 2017 Jane sold her little house & moved into Dunrovin Park Lodge.   Never one to have a cross or unkind word, always grateful and a smile on her face, Jane lived out her days there.  Jane lived a very full life and brightened everyone around her despite her early disability.

As a foster parent, Jane’s capacity for love extended to their foster children also and many have continued to keep in touch over the years.

Many thanks to the staff and care aides of Dunrovin Park Lodge in Quesnel for enriching Mom’s life there.  She loved you all so dearly.

There will be a Celebration of Life on Mother’s Day weekend 2023 in Quesnel.  Date and time to be announced later.

Share Your Memory of
Jane
Upload Your Memory View All Memories
Be the first to upload a memory!
Share A Memory