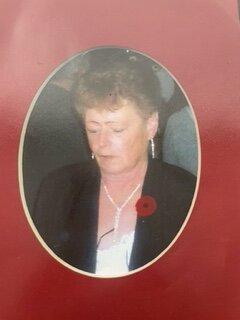 It is with broken hearts that we announce the sudden passing of Elaine Louise Underhill.  She will always be lovingly remembered by her daughter Tammy (Colleen), grandchildren, Kelly and Faith and son Bobby.  She is also survived by her youngest brother, Larry.  We can’t forget her beloved dog Smokee, who was her constant companion.  All whom loved her dearly and will never forget her kindness, generosity and fun spirit.

She was predeceased by her partner Richard (Dick) Burgess and Rollie and Bandit (her dogs) and other friends and family members over the years.

Elaine was born on October 9, 1950, in Regina Saskatchewan and left us on December 5, 2022 in Quesnel, B.C.  She called Quesnel home since 2007 but spent many years and made great friends in Tumbler Ridge, and Prince George, B.C.

Elaine accomplished so much in her short life.  She attended college, she owned a DJ Service (Magic Music), she owned a restaurant in Prince George and second-hand stores in various places along the way. She had the best garage sales around!  Elaine was always known as a hard worker, and it was amazing to watch growing up.

Elaine loved to go camping in her van and spent a lot of time at Robert’s Roost Resort in Quesnel until her health limited her mobility and her travel was limited to cruising around in her scooter.

Elaine had a wonderful community on Baker Drive in West Quesnel with kind neighbours that looked out for her.  We want to acknowledge two very special neighbours that found Elaine and tried to revive her, Beth, and William. We cannot express how much we appreciate what they did and will be forever grateful for this kindness and the care they took with Elaine. We would also like to thank Quesnel Fire and Rescue, and the RCMP for their prompt response.

Apparently, Elaine was the nosey neighbour that knew what was going on within a two-block radius. If you were a friend, she would be concerned for you and anyone that mattered to you. She would carry treats for all the neighbourhood dogs and give them out when she was out with Smokee.  Anyone that has a dog on her walking route knew Elaine.

Chronic Obstructive Pulmonary Disease (COPD) started to creep in and took over her ability to breathe with ease.  She suffered with this for many years, and it really impacted her quality of life the last year or so and her ability to move in the world as she wanted to.  Ultimately, this is what took her from us.  She fought it so hard but could not beat it.

While Elaine’s family and friends grieve her loss, they are choosing to remember Elaine in a way that honours her spirit.  She will be loved and never forgotten by the people whose lives she touched.

Elaine was also a long-time member of the Legion. It was a very special place that was near and dear to her heart where she made friends and had lots of fun times.

No service according to her wishes but in her honour, make a donation to the SPCA or raise a glass of wine for a toast.

Share Your Memory of
Elaine
Upload Your Memory View All Memories
Be the first to upload a memory!
Share A Memory