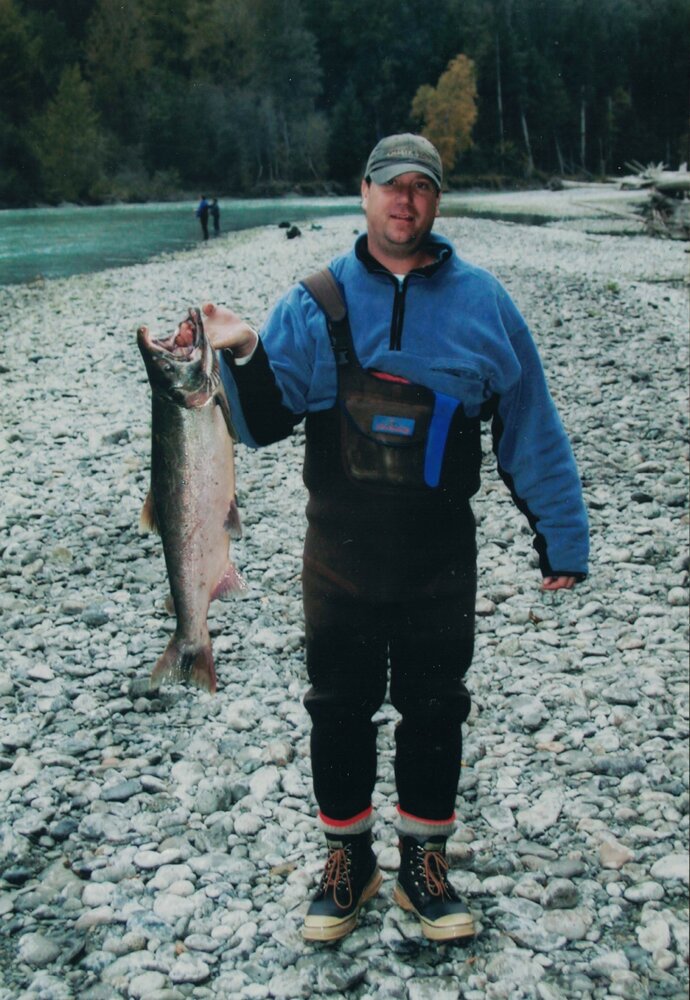 Brian was born in Prince George, BC in 1962 and then moved to Quesnel, BC in 1963.  His parents were Harold and Julie Pike.   Brian had three other siblings, Randy, Marlene and Sharon.  Unfortunately Brian’s father Harold passed away in 1971.  When his mother remarried in 1973 to Jake Neufeld he gained four more siblings, Dennis, Gary, Jim and Jenny.

He grew up and stayed living in Quesnel the rest of his life.  He attended Baker Elementary, Cariboo Junior and Correlieu Senior schools where he met many of his lifelong friends.

Brian was an avid sports fan.  He loved to watch hockey, especially the Montreal Canadians.  Brian grew up playing hockey for many years and then later started playing basketball in high school.  His basketball team won many championships throughout BC.  Brian was an extremely good athlete who had a very high vertical when he jumped.  It’s a no wonder with those monster calves!

After graduating from high school, Brian worked for Weldwood, now known as QPly for 42 years.

Brian played flag football for the Red Bluff Inn Vikings for several years.  Many good times with a great group of guys.

In 1986 Brian married Jolene Joaquin.  They had their wedding in Las Vegas and then had a reception in Quesnel with all their friends and relatives.  In 1993 his daughter Ashley was born.  Unfortunately, they divorced when Ashley was quite young.  Later on Brian met Becky Harnden where they lived common law for many years.  They had two children together, his son Justin born in 1997 and his daughter Haely born in 2000.  In 2020 Brian and Becky went their separate ways.

Brian was fortunate to become a grandfather, grandson Roman Arthur Vale was born in 2019.  Roman lit up Brian’s life.

He loved to go on holidays with his family to Vancouver Island and Whistler to name a few.  He enjoyed watching his children play sports over the years.  Brian had a passion for obtaining collectables.  He would always find hidden gems at the many garage sales he went to.

Brian loved his 80’s music, watching his sports, Curse of Oak Island, Gold Rush and numerous movies old and new!  He had a great sense of humor and could tell stories that would make you laugh so hard.  Just a bit of exaggeration in them though!  He loved to go fishing, especially to Bella Coola to get the “big ones”.  Every year Brian would go to Puntchesakut Lake to the “Picnic” with many of his good friends that he has known for years!  It was a great party weekend with just the guys!

He had to leave work in 2021 due to his illness with a rare autoimmune disease that eventually took his life at the age of 60.  Brian was in hospitals for nine months with this disease and still found a way to laugh at stories from the past.  Brian’s family would like to thank all his friends and family that visited him in the hospital countless times.  It made his last months much more enjoyable.

Brian’s family would also like to thank all the staff at GR Baker Memorial hospital, Prince George hospital and Kelowna hospital for all the time and care they provided to Brian for many months.  Brian will be greatly missed by all that knew him.  He will be in our hearts forever.

Share Your Memory of
Brian
Upload Your Memory View All Memories
Be the first to upload a memory!
Share A Memory