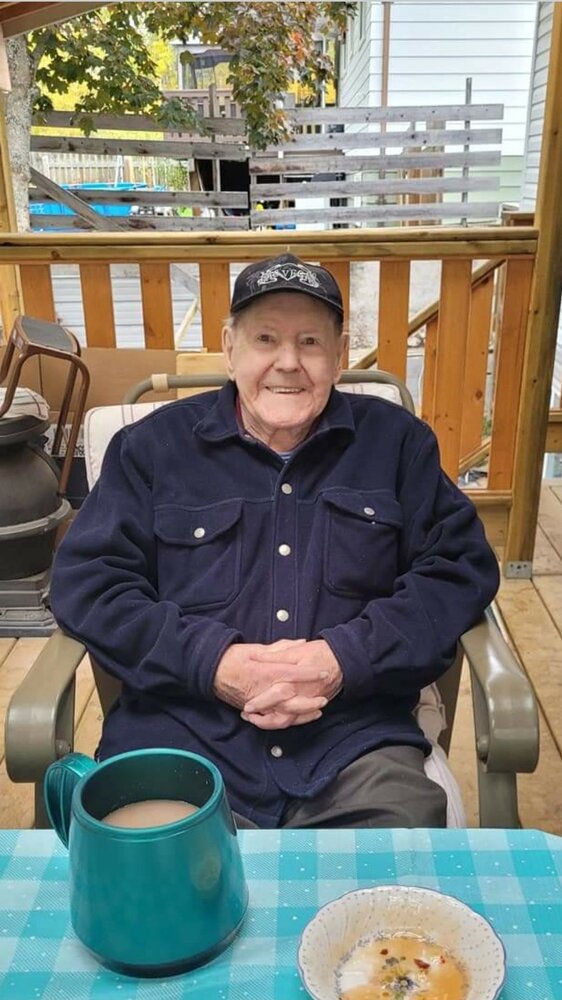 Harold was the third of eight sons born to John Samuel and Doris Exie (Davis). Harold was born in Lackawanna County, Pennsylvania. The family moved to Nova Scotia when he was about three years old. Most of the family lived in Springhill and worked in the coal mines until 1965.

Harold met and married Edith Gordon in late 1951. They went on to have four children, Doris Anne Rudy who still resides in Oxford, Nova Scotia, Mona Robichaud who passed away in 2010 at Amherst, NS,  John Kenneth (Carol) of Quesnel and Gerald David of Oxford, NS.

While living in Nova Scotia, Harold survived the ‘Bump’ of 1958 because his Mom had a premonition and told him to stay home. After that he went on to work for Nova Scotia Light and Power as linesman and at Gordon’s Greenhouses as a supervisor.

After the breakup of his marriage in 1969, Harold moved to Hixon where he worked at Netherlands Mills alongside his brother Don. In February of 1974, Ken followed his Dad to Quesnel getting a job at Weldwood so at that time they bought a mobile home together which they shared until April 1977 when Ken and Carol got married.

‘Uncle Harold’ became a family member and caregiver. First to Glen and Pat, Christopher and Shawn. As Pat says, when she and Glen split, she took Uncle Harold with her. After a while he went on to live with Les, Gail, Matt and Kevin where he stayed until Les passed away. At that time, he got his own apartment which is reported to have been ‘Grand Central Station’ for friends and family, the coffee pot was always on and beer came with the great nephews and friends who dropped by for a visit. Joe and Lina were just across the courtyard and kept watch on him, Joe taking him on endless numbers of ‘outings’ and Lina always having about ‘mountains  of food to keep him healthy. Many special holiday times were spent with Ken and his extended family.

In 2018, Joe and Lina asked ‘Uncle Harold’ to come to live with them.  This wonderful situation continued for him until he fell ill in late April 2022 when he was hospitalized. While in hospital he quickly declined until his death on June 1, 2022.  By luck, his youngest son Gerry had planned a trip from Nova Scotia for the last two weeks of May and was here when his Dad passed away.

Harold was an avid outdoorsman and took every opportunity to go out hunting or four wheeling. About the stories, —--- there are just toooo many to relate here but everyone has many to share. Harold has been described as an eternal teenager, a prankster with a twinkle in his eyes, never complaining, always having an open door and often asking, “so what kind of excitement is happening today?”