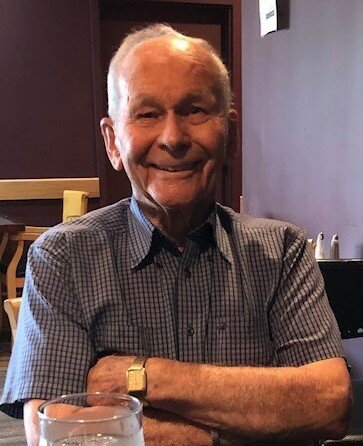 James (Jim) Wesley Closson was born on his family's farm near Archerwill, Saskatchewan on May 12th, 1931 to Gladys Maude (neé Howells) and Roy Adelbert (Buck) Closson, and died peacefully after a short illness on May 4th, 2022 in Kamloops, British Columbia.

He was pre-deceased by his wife of 64 years, Jean Marie (neé Jackson Rosbak), his parents, and his brothers Roy and George.

Jim was one of the hardest working, most energetic, determined people you will ever meet: a loving husband, a devoted father, a faithful friend, and a fabulous dancer. He could build or fix anything, and was always ready to help friends and family.  His children, grandchildren, and great-grandchildren were a source of great joy, and he would famously load the grandchildren too small to walk into a wagon, with the others tagging along, and walk to the nearby mall in Quesnel for ice cream and rides on the coin-operated mechanical horses and merry-go-rounds.

Life was not always easy, as Jim and Roy left school early to help with the farm, when all the able-bodied men left to fight in the Second World War.  Later, his first boss, Felix Holt, hired him at 16 to work on his farm, and they become lifelong friends.  Jim loved to tell the story of initially being paid a lower wage because of his age and size, but Felix soon raised that amount because he was "doing the work of a man".

Jim and Jean were married on March 11th, 1955 at the United Church in Archerwill.  Later that year, hoping to find work in the newly booming town of Kitimat, he travelled to B.C., but instead found a job in Quesnel, operating a forklift at Patchett's Planer Mill.  He stayed with that company as it became Beaver Sawmills, and then West Fraser Mills, until his retirement in 1995.  Working hard and devotion to family remained important to him throughout his life.  It was a point of honour that Jean did not work outside the home until the kids moved away; he often worked seven days a week to support them, and passed that work-ethic on to his children.  In the little free time available he loved hunting and fishing, and of course, any excuse to go dancing.  Hockey Night in Canada was the most important time of the week; dinner was served between the first and second period, and the dishes washed between the second and third.  Absolute silence the rest of the time, especially if the Maple Leafs were playing.

In 1992, fifty years after leaving school, he enrolled in the Air-Brake Certification course offered by the College of New Caledonia, and studied hard to pass the exam, which qualified him operate semi-trailer trucks, and meant his last working years were spent out of the weather, driving a chip-truck.

Jim and Jean settled in Walhachin after retirement and their labour and determination turned a barren acre of land into a desert paradise with an extensive garden, assorted fruit trees, and a large garage/workshop where Jim built many beautiful cedar chests.  Family and friends were always welcomed with generous hospitality: good food, conversation, and a walk around the village.  They travelled extensively across Canada and around North America by motorhome, and joined family members on cruises to Alaska and the Caribbean.

In 2017 they moved to Ridgepointe Seniors Residence in Kamloops, where they made many new friends, and joined in organized events and outings.  For Jim the hardest part of this change to "living in a goddamn hotel" seemed to be educating the wait staff to his dislike of most vegetables.  Meanwhile, Jim continued his active life, walking long distances in the surrounding hills to "wear out shoe leather", and earning the designation of 'Snow Angel' by shovelling snow off cars in the parking lot.  And of course, there many opportunities to dance.

After Jean's death in 2019, Joyce Aberdeen became Jim's constant companion and they shared many happy times until his sudden and unexpected death.

Jim has left a large hole in the lives of his grieving family and friends, and will never be forgotten.