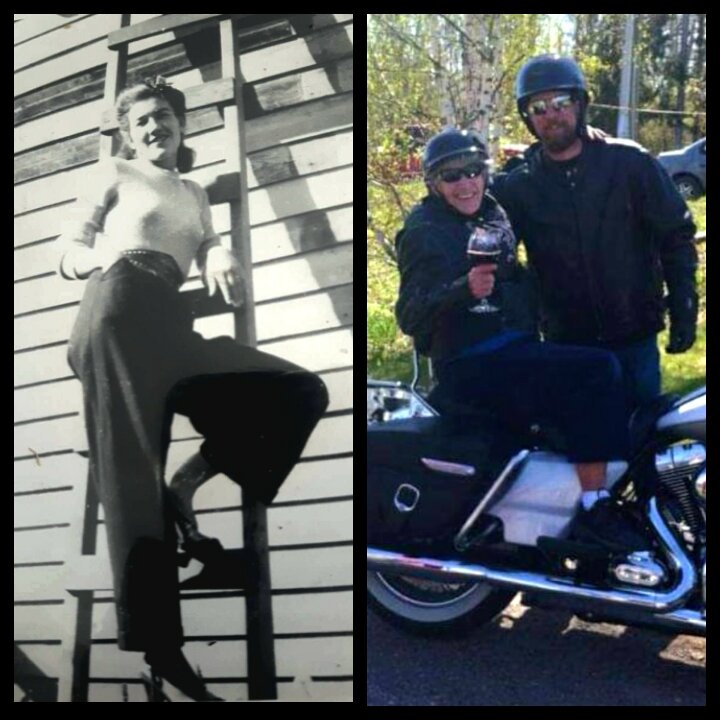 Lilliane was born in Regina, Saskatchewan and lived in many places throughout her life including Nelson, Merritt, and Vancouver Island before making Quesnel, BC her final home with her husband Sam.

In her younger years, Lilliane spent time in a convent being schooled by nuns and caring for her 4 brothers. She spoke and wrote fluent French and had a cheeky sense of humour. Lilliane was a wonderful cook, a talent she passed down to her daughters and granddaughters.

The majority of the food she prepared was sourced through hard work from her plentiful garden. When not tending to her garden or flowers, she had a passion for crafting, creating beautiful needlepoints, apple head dolls, and crocheting anything from a small doily to a gorgeous afghan for her loved ones to snuggle. Painting was also a passion and she enjoyed being surrounded by the art she created. Lilliane grew many flowers on the farm and would often let her grandkids pick some to take home after a visit. Her favorite place to be in her later years was sitting in the sunshine on her daughter Vi’s deck having a glass of wine surrounded again by flowers in all colours of the rainbow.

She had a love of music and played the accordion beautifully. Special occasions and family gatherings were always filled with the harmony of music, as her husband played the fiddle and harmonica, her son Sammy strumming his guitar her other son Clarence playing the banjo, and her grandkids trying to keep up on the spoons.

Her final days were filled with a gift from Sammy while he sang to her some of her favourite songs which brought her great comfort and joy. In her later years, Lilliane’s adventurous spirit took her on a train trip across Canada with her friend and companion Robert Taylor. She had a love of motorcycles and spoke of them often with Craig her grandson in-law. He took her on her final ride at the age of 85! She was decked out in leather and came back with the biggest smile on her face and a memory she cherished until the very end.

She is survived by her children, Violet (Stu), Sammy (Linda), Laurette (Nelson), and Marilyn (Wally deceased).

A special thank you to all the staff and support workers at Dunrovin, who made her final home a place of gentle love and laughter. To Darlene, her first roommate that made her transition easier in those early days, and gave her a lifelong friend.

Alzheimer’s may have taken her memories but it sure didn’t take her spark.

Into the sunshine she walks happilyamong gardens of beautiful flowers with gentle arms to hold her.

We will love you forever and miss you until we meet again.

At Lilliane’s request, no service will be held and she will be laid to rest at the farm she loved so much.

Donations in Lilliane’s name can be made to Better At Home Brenda Gardiner, SOS - Supporting Our Seniors at Willis Harper/via emt to quesnelgg@gmail.com or to the Alzheimer’s Society at alzheimer.ca/en

Share Your Memory of
Lilliane
Upload Your Memory View All Memories
Be the first to upload a memory!
Share A Memory