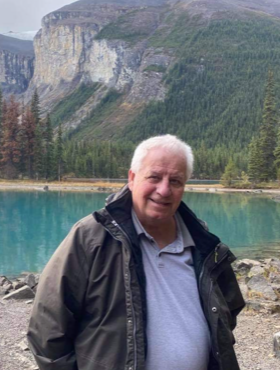 It is with deep sadness that we announce the passing of our Grandpa, Dad, Husband, and Brother, Michael Staves on October 14, 2021 in Quesnel, British Columbia. Mike deeply loved all of his family and never missed an opportunity to let the ones he loved know how much he cared about them.

After being born in York County, England, he was raised with his 2 sisters (Pat and Ann) in Glasgow, Scotland. As a young man he worked for the Royal Bank of Scotland and decided his earnings would carry him to new opportunities overseas. While during the recruitment meetings for the Royal Bank of Canada, he happened to see a newspaper titled the Vancouver Province in the office, and then when presented with the opportunity of moving to Toronto, Montreal, or Vancouver, he picked Vancouver not knowing that it was the furthest place in Canada from his hometown. Always to have a newspaper nearby though, he would go on to read the Vancouver Province for the next 49 years.

He deeply loved his children (Brian, Mark, Robbie, Courtney, Clint and Andrew), and always let them know how proud he was to be their father. He and his wife Jodi were also extremely proud to be grandparents as well, and were blessed with (Brayden, Serra, Caleb, Haden, Taylor, Danika, Julian, Lexi, and Blake).

Mike had a passion and unquenchable thirst for knowledge, he could answer Jeopardy questions quicker than Ken Jennings, and even went as far as to memorize every card in Trivial Pursuit so that he would never lose. He always tried to live his life with a smile, and to brighten the days of others around him. Also quick with a witty joke or a warm hug. He loved history. He loved sports, especially the Vancouver Canucks. He loved talking politics, and of travel. Works of literature like the poem ‘If’. What he would call the finer things in life. Always one to look for the light in the world, he often spoke of the good things in life, and about doing the right thing. Whether it was woman’s rights, indigenous rights, or stopping tyranny in the world, he embodied peace and love. To hold your head high, to own your mistakes, and to carry on.

Mike was pre-deceased by his son Brian David Staves, and we know he is with him now. Telling jokes like “How do Angels greet each other? They say Halo” or “Why do shoemakers go to heaven? Because they have good soles”. Or quoting the poem "If" by Rudyard Kipling; “If you can talk with crowds and keep you virtue, Or walk with kings- nor lose the common touch” OR “If you can dream- and not make dreams your master”. He was our dreamer, and he dared us all to do the same. He will be deeply missed. The world has lost another GREAT ONE!

A memorial will be announced soon in Quesnel, BC. In lieu of flowers donations can be made to BC Children’s hospital in his name.