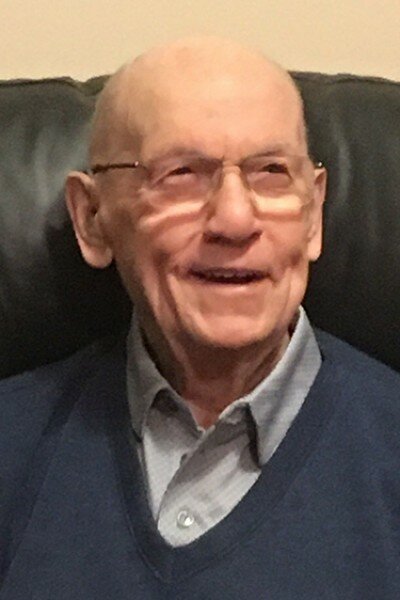 Harvey Copeland passed away peacefully on September 19, 2021 in Osoyoos with family by his side. He was born on May 26, 1924 in Melfort, Saskatchewan where he lived until he moved to Vancouver as a young man.

Harvey served with the RCAF in WWII doing 32 missions as a tail gunner before going to Boundary Bay as an instructor. On VJ Day he met the love of his life, Madeline and they were married soon after.

He became a watchmaker and gold smith while living in Vancouver. After a few years they moved to Prince Rupert where he perfected his skills! In the early 1950’s Harvey and Madeline moved their family to Quesnel. They had heard a rumour that a pulp mill was going to be built and decided that was their opportunity to start a business of their own.
They opened Quesnel Jewellers and developed many loyal customers and good friends during the 40+ years it was open. When Harvey wasn’t at his watchmaking bench, he could be found at the golf course, curling rink or enjoying time with his family.

He and Madeline enjoyed travelling and spent many winters in Arizona. In 2017 they moved to Osoyoos and enjoyed the milder winters and exploring the new surroundings. Harvey will be remembered as a kind and gentle soul as well as a huge supporter of community programs and sports in Quesnel.
He will be missed immensely by his wife of 75 years, Madeline, sons Bill (Rosemary) and Rick, daughters Terry (Don) Coldwell and Debbie (Tom) MacKenzie, grandchildren Heather (Jeff ) Burke, Rob Copeland, Trevor (Terri) Coldwell, Blair (Sarah) Coldwell, Sommer Coldwell, Eric (Mel) MacKenzie and Amber (Rob) MacKenzie- Evans as well as several great-grandchildren and great-great-grandchildren.

“He didn’t tell us how to live. He lived and let us watch him.”

Share Your Memory of
Harvey
Upload Your Memory View All Memories
Be the first to upload a memory!
Share A Memory