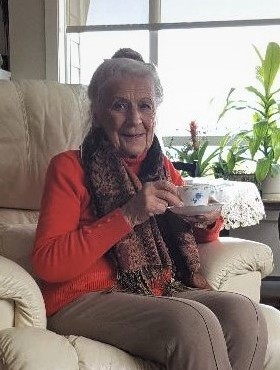 On March 6, 2021, June Y. Levulett, 93, of Kelowna, British Columbia, Canada passed away with her  loving daughter, Carol Eros by her side. June (Yanina Theophila Yendryas) was born in Dobczyce, Krakow, Poland, on October 4, 1927, the daughter of Maria Kosturkieurcz and Theophilus Yendryas. She migrated, with her parents, to Canada in 1928, settling on homestead land in the prairies of Alberta. Her father grew wheat and worked for the Canadian Pacific Railroad. In 1939, at the outbreak of World War II, the family moved to Wells, a small mining community in British Columbia where her father worked in the mines. Both she and her father received their Canadian citizenship in 1941. June started earning her own way at an early age-caring for children, cleaning homes, or working in local cafes.

She met American Serviceman and World War II veteran, Wilmer Carroll Levulett, in 1947, in Wells where he was working on a mining dragline. They married in April 1948. Her two daughters were born in

Wells, and after a couple of short visits they moved to the United States in 1951, first living in Oroville, California, her husband’s birthplace. Following the birth of her son in 1954, the family moved to Chico, California. June became an American Citizen on June 8, 1960. With her American citizenship she embarked on her life-long interest in history, grass roots politics and the Democratic Party. She planted roots in Chico and made many friends, working hard to raise her family as a single mother after divorcing her husband in 1961. June loved Butte County, especially Bidwell Park, and looked forward to her dips in Chico Creek after a long day at work. In 1968, at the age of 41, she was accepted into the Licensed Vocational Nursing (LVN) program at Butte Junior College, receiving her LVN license in 1970. After graduation she worked full time at Enloe hospital and continued her education as a part-time student at Butte Junior College, receiving her Associate Arts degree, with honors, in 1973. June joined the Peace Corps in 1973. She was assigned to Abidjan the Ivory Coast of West Africa. She returned to the States in early 1974, landing in Washington D.C. where she worked at a 900-bed hospital and volunteered at the Zaccheus House, a “street clinic” for the poor and homeless. During that time June decided to pursue a career in social welfare. Later in 1974, June returned to Chico, where she was

a full-time employee at Enloe Hospital and became a part-time student at Chico State University. She graduated in 1978 at the age of 51 with a Bachelor of Arts Degree in Social Welfare.

In 1979 she returned home to Canada as a landed immigrant, settling in Edmonton, Alberta, close to her daughter Carol. June worked at the House Next Door Society, helping clients obtain the life-skills necessary for the outside world. While in Edmonton, June was able to share many happy years with Carol and her husband

Wayne, and Morgan, her first grandson. After retiring in 1993, she lived the remainder of her life in Kelowna, British Columbia. She spent countless days exploring the beautiful Okanagan Valley.  Long walks throughout the town and by Okanagan Lake were among her favorite activities. She also enjoyed many organized trips with local travel groups and friends; however, it was not unlike her to hop in her car and head down Highway 97, a straight shot to California where she visited friends and family. June loved to explore and learn new things about people and places, whether by car, bus, train or airplane. In 1996 she travelled to Eastern Europe and Poland with her Chico friends, Dorothy and Mack

June enjoyed helping her community, always willing to lend a hand. She was recognized as a Local Hero Volunteer with the Kelowna Women’s Centre, where she was awarded for her service. Under the leadership of Patience Spinoza, an international student from Africa at University of British Columbia’s Okanagan campus, June helped establish Age-Link; a group created to bring together people of all ages in the community. Age-Link was an important part of June’s life in later years, particularly her friendship with Patience Spinoza. June made many friends while living in Kelowna and enjoyed lively discussions over tea, a meal, a drink, or a beautiful dessert.

In 2017 four generations of family gathered in Kelowna for a joyful celebration of her 90th birthday. Her granddaughter Darcie Maffioli, and husband Jason, brought Everett her great grandson to Kelowna to meet her in late 2019.

June wanted nothing more than to help make the world a better place. She was a supportive and thoughtful friend and loved her family with all her heart. She was an intelligent woman, who read everything she could get her hands on, and kept up with world and local news and politics, despite the advice of her family. Each day was an opportunity to learn something new. June was a spectacular cook. Everything she made was delicious and served with flare. June had a quick mind and kept herself busy, reflected not only in her careers, but in her crafts. She was a seamstress, and her family learned not to touch her scissors.  She made school clothes for her children and prom dresses, and the beautiful coats she loved to wear. She spent many hours with intricate macramé creations, crochet, and her legendary knitted blankets, sweaters, purses, stuffed toys and pillows. Everything she made was given to family, friends, and to those in need.

A fiercely independent, free spirited soul, she was able to live on her own right up to the end. She lived a full and rich life.

June’s ashes will be interred at Tranquility Gardens in Quesnel B.C., Canada where she can be close to her father and other family members. For those wishing to memorialize her please consider a donation to the Society of Hope, #101 Benvoulin Court, Kelowna, B.C., Canada V1N2C7, 1-788-478-7977, or your local homeless shelter or humane society.