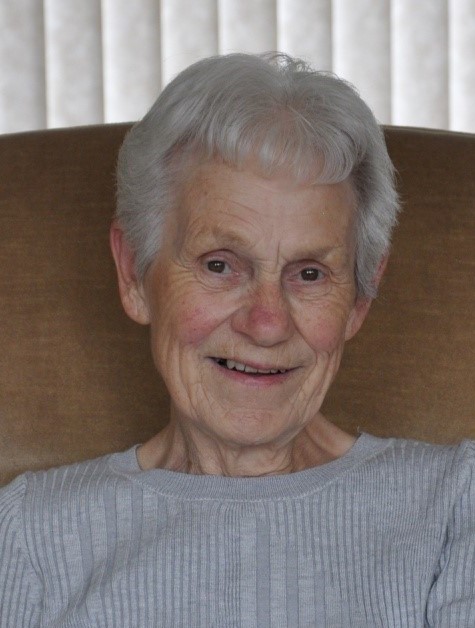 With deep sorrow we announce the passing of Wilma Thomson on Wednesday, December 30, 2020 in Quesnel.

Born in rural Manitoba, Wilma grew up the middle child in a large family including three sisters and three brothers.  In 1956 the family moved to BC where Wilma met her love Grant.  Grant and Wilma were married in 1957.  The couple had two children: daughter, Dale and son, Scott.  Wilma worked in the office at Weldwood for nearly 20 years before retiring.

Wilma had a real zest for life; anything she turned her hand to she did well.  She was a terrific athlete.  As a young woman, she was a competitive softball pitcher.  In winter, Wilma curled with considerable intensity.  During curling season, if she wasn’t actually playing the sport, she was watching it on TV – and family knew better than to suggest changing channels!  Mid-life, Wilma took up golf and had great fun socializing with her Red Hat ladies on and off the golf course.

Wilma also enjoyed hobbies on the home-front.  She was a wonderful seamstress who churned out many lovely outfits.  As time wore on, she became less interested in making clothing, and much more captivated by quilting.  She was a prolific quilter whose gorgeous work was given to anyone who was celebrating a special occasion.  Her artistry was also evident in her yard.  She was an industrious gardener whose showy flowers blossomed spectacularly from spring into the autumn.

Despite her varied interests, Wilma’s true devotion was to her family.  She was the “glue” that held many a family celebration together.  She kept track of the birthdays and anniversaries; she planned family reunions; and she hosted delicious feasts.  Whenever family members struggled, she was there with practical help.  She was the consummate caregiver – looking after young grandsons, seeing to the needs of aging parents, lovingly supporting Grant after his debilitating 2009 stroke.  Although most of her siblings did not live near her, Wilma maintained ties with them through regular phone calls.  Her close connections with her two younger sisters, Fay and Betty, proved particularly comforting to Wilma during her final difficult year.

In 2019, Wilma was predeceased by Grant her husband of 62 years.  She is survived by her children Dale (Dale) and Scott (Wanda), grandsons Travis (Megan) and Lance, as well as great-grandchildren Madison, Lucas, and Claire.  Wilma was a resilient person who lived a happy life.  Memories of her love and courage will be held deep in our hearts forever.

No service by request.

To plant a beautiful memorial tree in memory of Wilma Thomson, please visit our Tree Store

Share Your Memory of
Wilma
Upload Your Memory View All Memories
Be the first to upload a memory!
Share A Memory
Plant a Tree