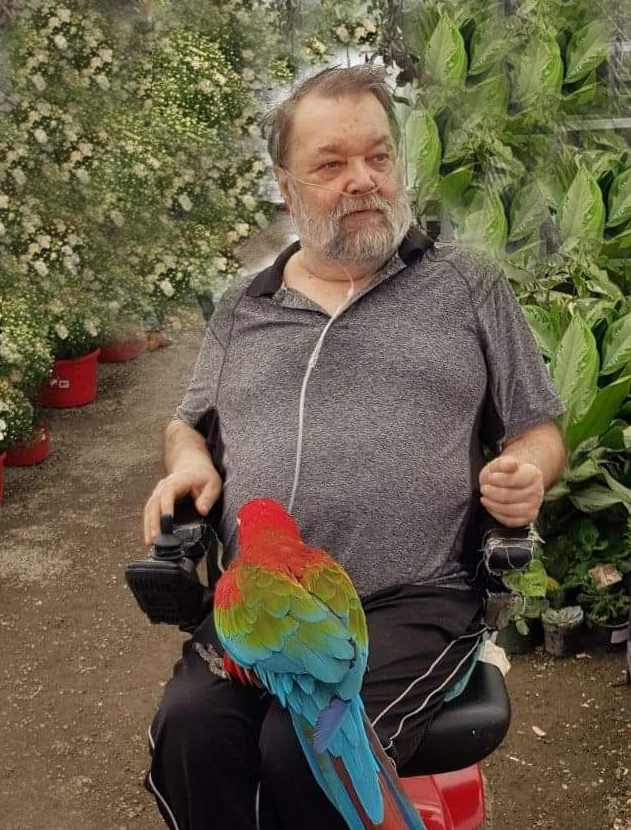 On September 8th, 2020 John Peter McCrea of Quesnel, BC passed away after a long struggle with COPD and other illnesses.  He made 73 rotations around the sun and left us the day before his 73rd birthday.

Peter was born on September 9th, 1947 in Lima Peru to parents Jack and Ann McCrea.  They were Canadians working in Peru when Peter was born.  Peter spent much of his youth in Lima going to boarding school and having pets like a parrot and monkey as best friends.  He and his parents moved back to Castlegar BC in 1960.  Peter had to learn English very quickly for school in Canada.

Peter married his first wife Bev on October 8th, 1966.  They had a son Ron February 13th, 1967.  That marriage ended in 1969.  In 1970 while visiting his parents in Sooke BC he met the love of his life Janet.  They were married November 13th, 1971.  They lived in Sooke briefly, moved to Coquitlam and then on to Mission where their son Shane was born October 16, 1974.  Work took a downturn so they packed up and moved to Quesnel to help Janet’s parents at their 10 Mile Lake farm.  Soon their daughter Echo was born February 9th, 1978.

Peter was a Boilermaker Local 359 and worked at most if not every BC pulp mill and shipyard.  He was always reading and learning many things.  He earned his Ham Radio License in 1979 and his Pilot’s License in 1982.  He enjoyed working on and with computers.  In 2002, due to his health Peter retired from the Boilermakers and retrained to be a Health & Safety Officer on construction jobsites.  His health again forced him to retire in 2013.  Peter enjoyed wood-turning pens to sell & cooking for his family.

He loved his wife and children dearly and while not one to express words of love, he showed them with his teasing, sense of humor and quality time spent with his grandchildren.

Peter’s life took him to many parts of the world.  He was happiest at home with his family and many beloved pets.  His quick wit and sharp humor earned him many friends in life.  He fought to stay with us for a long time.  He babysat his 2 grandsons as babies and had a personal goal to see his grandson Denton Law graduate.  He was so very proud to see that happen in June 2020.

He is survived by his wife of 48 years Janet McCrea, son Shane (Misty Hockey) Granddaughters Keisha (Brian) Hailey Simpson (Tyler) Emilee, and Shaina.  Great grandchildren Kaiden, Tyra, Brock, Joseph, Camilla, Owen and Scarlette.  Daughter Echo Law (Jason Nevachnacoff) grandsons Denton and Gavin Law and bonus grandchildren Shelby, Spencer and Hudson.  Daughter in law Leann and grandchildren Jakob and Alyssa Kopytko.  Predeceased by his parents Jack in 1999 and Ann in 2007.  Son Ron in 2012 and great grandson Ethan in 2020.  Rest peacefully dear husband, father, poppy and grand-poppy.  Give us all a woof when you come back as a dog so that we will know it’s you peeing on everything.

--Rest now with the angels--

To plant a beautiful memorial tree in memory of John McCrea, please visit our Tree Store